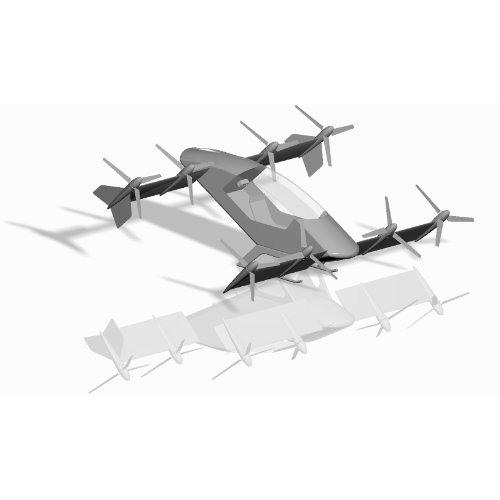 Vahana is an A³ campaign to create a low-cost, single-passenger, electric VTOL aircraft. As part of their design process, A³ conducted the Vahana Configuration Trade Study to better examine 2 different configurations (an electric helicopter and an electric eight-fan tilt-wing) using multidisciplinary design optimization (MDO).

A³ set up a MDO sizing problem in which they compared an electric helicopter model and an electric eight-fan tilt-wing model over a range of operating distances (10 km to 200 km in 10 km steps). At each distance, both vehicle models were optimized seperately for Direct Operating Cost (DOC) by varying 5 design variables: Cruise Speed, Rotor Radius, Battery Mass, and Takeoff Mass. The A³ team also provided the optimizer with 3 constraint equations (4 if the vehicle was a helicopter) that defined certain design requirements (e.g.: the vehicle’s effective energy capacity had to be greater than the amount of energy required to execute a reserve (“worst case”) mission).

As a result of their Sizing Trade Study, the Vahana team concluded that an eight-fan, tilt-wing configuration would best meet their broad design requirements for a low-cost, single-passenger, electric VTOL aircraft.

To read about the OpenMETA Vahana Configuration Trade Study, check out our blog post.